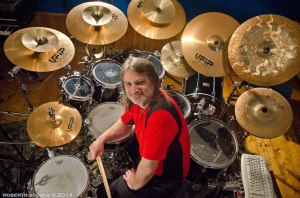 One of the busiest drummers of the Jazz/Fusion area in Italy, Davide’s drumming is a combination of taste, sensibility, highly technical skills in different musical areas and genres with a deep, authentic knowledge of musical languages.

All these skills allowed him to be “specialized” in not just one but in various musical styles, as demonstrated by his live and recording performances. Davide is known to perform in both electric as well as  acoustic settings, without compromising his unique style.

Recordings and performances with:

He has played in Italy, The Netherlands, Belgium, Switzerland, Spain, U.S. and Canada.

“ELECTRIO” is Davide’s third solo cd published in 2012; his newest, vibrant most recent work. A full auto-production in which Dave is involved in all the production, recording, mixing, mastering and promoting areas.

Davide is the sound engineer in his own studio in Rome, L’Oasi, where he records his solo cd’s, as well as producing other artist’s projects as well.

In 2002 he created the first Italian drumming community, called “DRUMMERS UNITED”. In 2005, in association with Carisch, Davide produced a DVD of the show  in Rome “TEMPI MODERNI”. Besides Davide, the DVD also showcases 12 of the finest Italian drummers.

Davide is also very active in teaching. He has been part of the most important music schools in Italy such as the “Saint Lous Music College”, the “Università della Musica” and “Percento Musica” in Rome, appearing always as a faculty leader.

From ’98 he is the head master of “L’OASI”, his own music school, always in Rome.

He’s been also an active clinician in all the Italian area.

In 2006 and in 2013, interviews of Davide has been released on the main Italian drumming magazine “DRUMSET MAG”.

In 2006 he published his instructional opera entitled “DRUMS COLOURS” , that will be followed by a DVD to support the books, with also live performances of Davide and his bands as well.

In 2012 Davide’s third solo cd is released: “ELECTRIO” with top italian musicians A.Gwis on rhodes and P.P.Ranieri on bass.In 2015 the second long awaited DOUBLE cd by Carolina Brandes “Flowers of the deeper soil” is released, with guest such as the guitar star Kurt Rosenwinkel and SF jazz collective leader Robin Eubanks at trombone, where Davide is involved not only as a drummer but also as a recording and mixing engineer and producer.

“Silence score” is the video that has been released for supporting Carolina’s cd in 2016, and quickly exceed the 100.000 views on You Tube.   Davide has endorsed UFIP cymbals since 1992, and VIC FIRTH sticks since 1994.